the gospel according to calvin (klein)

The contemporary equivalents to the "altar with an inscription" (Acts 17.23) and "some of your own poets" (Acts 17.28) has always been a fascination to me.   The Apostle Paul was flexible enough to commence his preaching from 'texts' in his culture — and then he was creative enough to move from there to Jesus.
Do we have a similar flexibility and creativity?
Do we discern the 'inscriptions' and the 'poets' of our time?
Is this approach in our tool-bag of communication convictions and techniques?
It should be. Our socio-religious context needs this additional mind-set and skill-set.
And ... Calvin Klein Fragrances is the perfect place in which to play, practice — and even preach 😐.
When our friend, Miranda, sent me the imagery of the latest Calvin Klein fragrance, it took me back to my earlier engagements with Calvin Klein.  These people have the most remarkable ability to capture the spirit of the age and to express it in a single word — and they've been doing it for a generation. 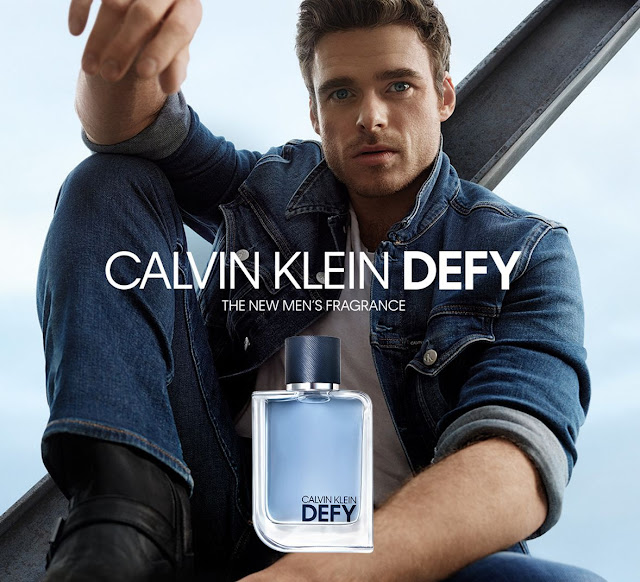 It all started when I commenced teaching at the Bible College of New Zealand (BCNZ) — now known as Laidlaw College — in the early 1990s.  In my very first year, I was given a new course to develop in the Diploma programme. 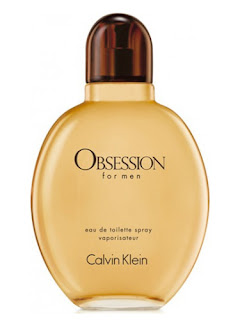 It was called Learning to Think Biblically.  I was charged with helping the students develop a Christian worldview.
I loved it.  We looked at the key biblical teaching on the subject.  We dipped into some great books together, like John Stott's Issues Facing Christians Today ... and I had some fun creating assignments.
Having watched Obsession, Eternity and Escape emerge in the preceding years, it struck me how well these words captured, even mirrored, the spirit of the late-1980s.
So, students were asked to reflect on the trajectory of the culture around them and come up with the name of the next Calvin Klein fragrance — giving reasons for their decision. 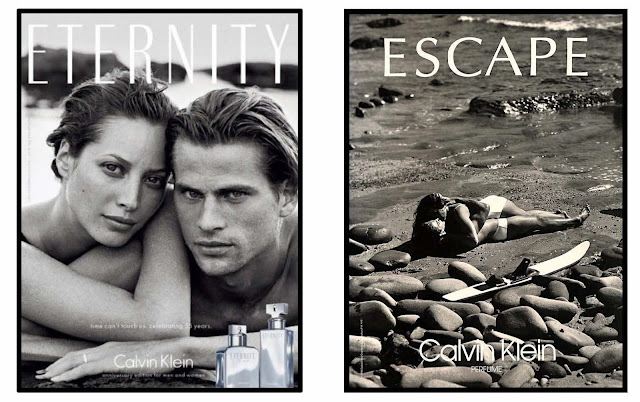 They were young, just tip-toeing their way into theological education at a Diploma level — and yet their work was remarkable.  My stuff is still in boxes.  I'm not sure I've retained any of the assignments, but my memory is that some got very close to where Calvin Klein travelled with its names of fragrances through the next decade.
So, the quality of the students' work left me feeling I was onto something... 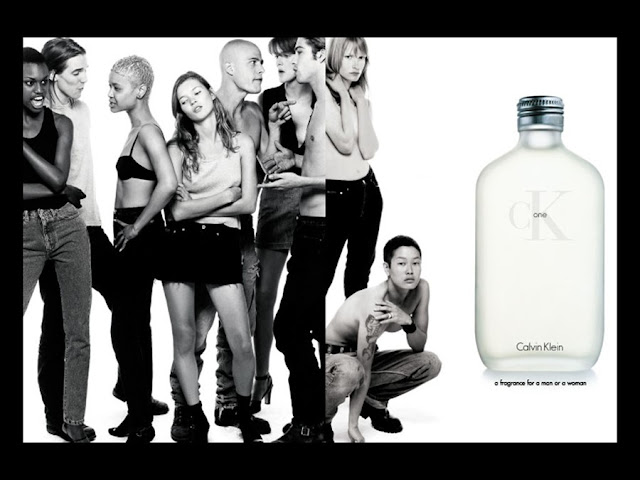 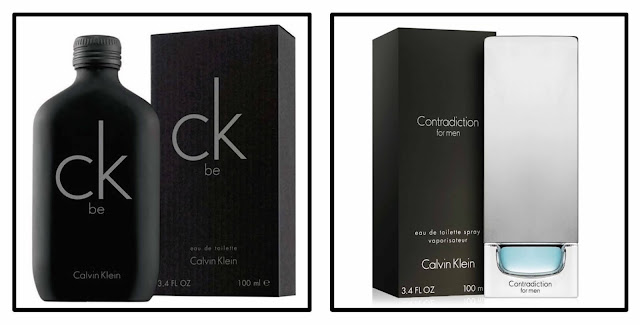 It was to be cKone that "defined the decade ... democratic in principle and non-aggressive in spirit" (Andrea Cheng). It was "one of the first beauty products openly marketed as unisex: for a young gender fluid customer as well as for those who identify as male or female.  Quite simply, it was — and still is — for everyone, and its messaging reflected that democratisation: 'one for all' " (Sabrina Cooper). 'Equality and emancipation'. 'Be yourself and connect with others.'
After I moved across to Carey Baptist College at the start of 1998, I was invited back to speak at the BCNZ Graduation Ceremony in 1999.  I made the decision to play a bit with the names of these six fragrances.  As part of my preparation, I read a biography of Calvin Klein and did my homework on each of the fragrances.  I wanted to try to demonstrate this flexibility and creativity because I was becoming fascinated, not just with how these six words captured the spirit of the culture — but how they could be reframed to capture the spirit of the gospel as well.
I remember the occasion like yesterday.  It was at the Victory Christian Centre, down near the waterfront, in Auckland.  I can still see the Principal in the front row — Brian Hathaway, whose funeral I was to take, just four years later, when he suddenly died one Sunday morning, while he was out jogging — with his hands over his face, peering through the gaps in his fingers, as I worked my way through various images!
It is incredibly silly to try and include the manuscript here — and obviously you'll have to expand it — but the symmetry in what I was trying to do is important in the flow of this blogpost... 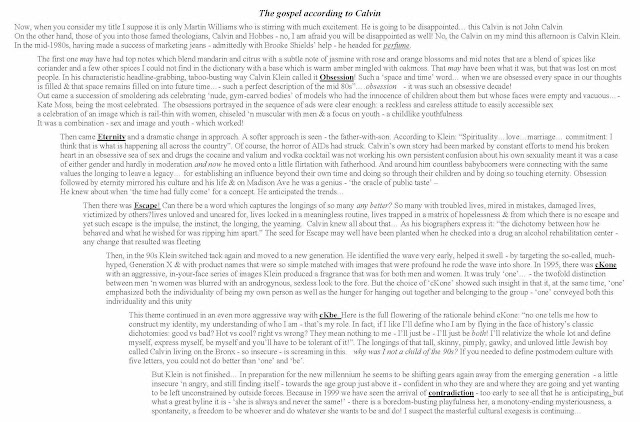 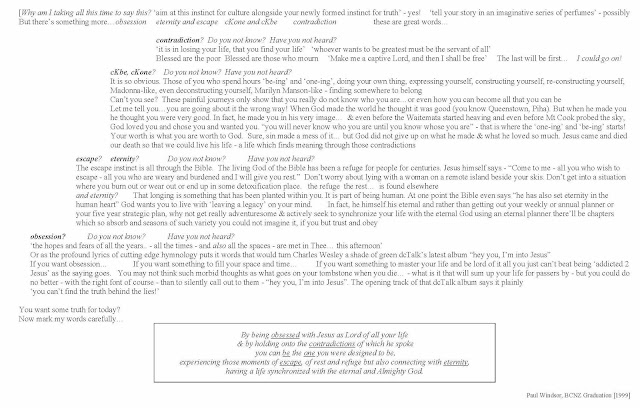 The years rolled on and I found myself drawn into other responsibilities, but I kept one eye on the Calvin Klein fragrances.  Nothing much changed.  Calvin Klein did not disappoint — still capturing the spirit of the culture.  However, for those with eyes to see, still pointing to the gospel as well.

And they've just done it again...
If I could have that Diploma class back again and give them that same assignment, someone among them would have created Defy.  Simple. Profound.  It captures the spirit of these recent months and years perfectly — but how would you get from here to the spirit of the gospel and the aroma of Christ?
According to the actor in the video, Richard Madden, "the scent and feeling behind it is to do with bravery and kindness and compassion and empathy ... (it) is all about defying your own limitations, your own self-doubts, your own restrictions that we all put on ourselves."  Hmmmm.

It is kinda odd, but I haven't read many of the books for which NT Wright has become famous. However, in the year of that Diploma assignment (1992), I stumbled across New Tasks For a Renewed Church and in it Tom Wright writes of how paganism provides 'a parody of Christianity':

"Christianity is the tune which paganism sings in the wrong key, the true picture of which paganism sketches a caricature.  Paganism gets its force, as does a caricature, by emphasising one aspect of the good, God-given created order, at the expense of other aspects.  Christianity, in response, must present the true picture which will enable people to see the caricature for what it is ...
... Like Paul in Athens, we must take the risk of affirming the goodness of the world, and of affirming Jesus within that context ... Paganism is a feeling after the truth. It is like a moth trying to fly to the moon: it is true that there is light to be found there, but unfortunately there is no heat, and no atmosphere to fly for most of the journey.  It is a deception.  Paganism is the same.  It shines with borrowed light, luring unsuspecting humans towards a goal which cannot in fact be reached and which would offer no warmth if it could. But this does not mean that there is no such thing as the sun (emphasis his) ...
My major suggestion ... is that we should copy the early church, and Paul, in finding out where pagan gods and goddesses are being worshipped, and finding ways of worshipping Jesus on the same spot" (125, 126).

It takes us back to CS Lewis, doesn't it?

"If I find in myself a desire which no experience in this world can satisfy, the most probable explanation is that I was made for another world."

It takes me on to the haunting, alto voice of Caroline Cobb, refreshing Ecclesiastes for us — with listeners needing to be attentive right through to the end of the song (because there are hints of both NT Wright and CS Lewis here, as well as the names of two Calvin Klein fragrances!) ...
nice chatting
Paul
at September 26, 2021

"If you tell the truth the first time, you don't need to remember what you said" (Dr Ashley Bloomfield).

Television can provide such a window onto the soul of a nation. Whenever I'm travelling in unfamiliar countries, I like having a TV to ...