the least of these

It won't win an Oscar, but nor is it cringe Christian cinema.

The Least of These is the story of the martyrdom of Graham Staines and his two boys, Philip and Timothy, and it is well worth watching. The decision to build the plot around a journalist, played convincingly by Sharman Joshi (of Bollywood's The Three Idiots fame), seeking to find evidence of inducement in the conversion of tribal people, was a good decision. I was surprised by how little time the Staines' character was on the screen and when he was, it was as a gracious, gentle and compassionate person. Another good decision. The plot had some unexpected twists which is where I became emotionally engaged with the story. The cinematography took us into the beauty of rural India, while the portrayal of life in that rural India, where I was raised thirty years earlier, looked authentic to me. 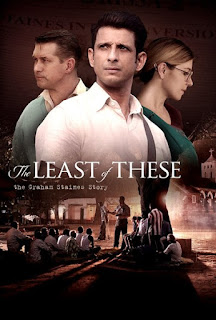 But yes, you could argue that there is too little tension in the first half and too much sentimentality in the second half. Yes, the script could have been tighter and more compelling, especially when it articulates the gospel truths which motivated the Staines' family and that affirmation of forgiveness from Gladys which stunned a nation.

But see past all that stuff to a movie which needs to be seen.

Barby and I have been surprised by how much, twenty years later, this story lives on in the soul of the Indian Christian community. It is huge. It is often in conversations and sermon illustrations. Sometimes it feels like Jim Elliot & Co for a new context and a new generation. At a time in history when the global church can and must find ways to express a fuller solidarity with its persecuted sisters and brothers worldwide - this solidarity is reason enough, all on its own, for theatres to be well-populated and people to be gripped by this story.

As we sat there in that cinema here in New Zealand and took it all in, I'm not sure which of two sadnesses impacted us more. Making a choice was the very first thing we verbalised to each other afterwards, spontaneously and independently - and at the same time. 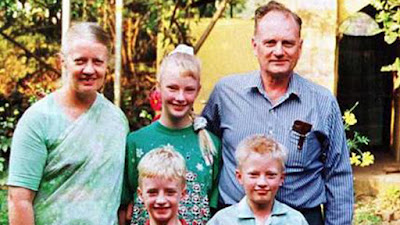 Was it the sadness in the content: the fiery martyrdom; the mother and daughter (Esther) left all alone; the rejection of those suffering with leprosy; the easy misrepresentation of mission motivation; the endemic corruption; the stories of Indian martyrs left untold - and unfilmed...? Or, was it the sadness in our context, as the only two people in that cinema?

Ken Keyte said…
Raewyn and I went to see The Least of these last night after reading your blog. Wow, what an impacting movie! There were about 20 people at the 6pm screening. I'm going to advertise it to our congregation. I hope many will go and see it (and remember to take a box of tissues!)
Ken
4:00 PM, May 21, 2019

Paul said…
So pleased you were both were able to see it - and that your stats were better than ours!