In training preachers across cultures, it is often a struggle to translate the word manner. And yet the manner of the preacher is too important to overlook. One way forward is to see the sermon to be like a song, with both lyrics (what we say) and music (how we say it). Listeners decide whether to listen to our sermon, alarmingly quickly, not just because of the lyrics coming from our mouths, but also because of the music flowing from our lives - our manner.

What is true of sermons can also be true of books.

I have just finished a book that is like such a song. The lyrics are brief and accessible. 15 chapters across 130 pages. The author has a legit PhD and yet he has 'found a simplicity on the far side of complexity', offering the reader accessible, refreshed truths. And then there is the music of the song. With his tender, loving, wise, bold, honest and direct manner, his stories and thoughts left my heart strangely warmed, again and again.

The book? Following Jesus in Turbulent Times: Disciple-Making in the Arab World

It is the story of a church in Beirut, where 70% of the attendees are refugees, mainly from Syria and Iraq. It is the Resurrection Church Beirut (RCB) and the book is authored by its pastor, Hikmat Kashouh. His first sixteen years of life were spent under a ruthless Syrian occupation and now here he is, all these years later, pastoring a church that is welcoming hundreds of Syrian refugees. Go figure. That is the gospel at work. That really impacted me. 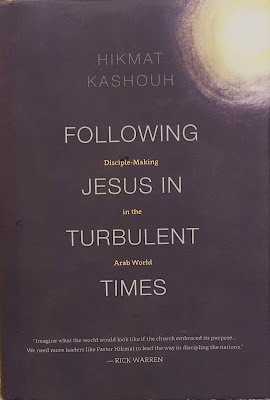 Now, don't shut down on me, simply because a church in Beirut filled with refugees seems a long way from you and your setting. Over the years I have found that the most searching prophetic word is often the one spoken from out of a vastly different world to mine, not a similar one. As you work your way through those chapters ... Reaching-Witnessing-Changing-Nurturing-Teaching/Instructing-Growing-Serving-Freeing/ Healing-Praying-Belonging-Structuring-Suffering-Pooling Our Resources ... you will be astonished by just how relevant this book is to you and your church, wherever you and your church might happen to be.

Here, let me prime the pump and give you a taste (yes, I do enjoy mixing my metaphors):

On Pastor Hikmat's own call into the pastoral leadership of RCB:
"You can't lead a church well unless you are a man or woman of prayer, enjoy reading, and love people. Prayer moulds your character, reading sharpens your skills and expands your mind, and love transforms you and those you are working with (8)."

On hospitality (and being a bit counter-intuitive to the Western mind):
"I cannot emphasize enough what pride and pleasure it brings an Arab family to be able to host a guest or guests. It may feel uncomfortable and awkward for the Westerner, but you honor them by letting them become the hosts, letting them sit in the high place, while you learn how to be a guest in your own country, willing to sit uncomfortably, listen attentively and love abundantly (12, see also p71, on Life Groups)."

On creating a multi-ethnic leadership team:
"We must also model leadership by encouraging every mature leader, starting with the pastor, to mentor a potential leader from a different ethnic group. So a few years ago we made it our official policy that every leader at RCB should have an emerging leader from a different background shadowing him or her in their ministries (29-30)."

On teaching:
"In a discussion with a Muslim friend who lives in the UK, he told me that his relatives and friends have little respect for Christian leaders. They find them weak, indecisive, shaky and uncertain; whereas Jesus in his teaching by word and deed was daring, courageous, brave and fearless. To be courageous does not mean to be polemical and attack other faiths ... it means proclaiming Christ boldly yet lovingly, using confident rhetoric accompanied by a transformational way of life and radical deeds of love that witness to the power of the words spoken (44)."

On the Fruit of the Spirit in the Arab world:
(On gentleness) "Gentleness reflects a secure personality, a balanced character, a shepherding heart and a motherly soul. It is going the extra mile, turning the other cheek, and looking into the eyes of the enemy with meekness, yet without fear. It is winning when others think that we have lost. The Christian community is called to be gentle, especially with those who are different from us - refugees, strangers, and those who are ethnically unlike us. A gentle Christian does not throw stones, expel strangers, exploit the poor or fear the unjust (58)." 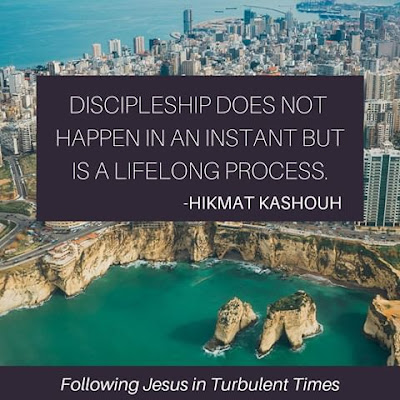 On women and men both being gifted to serve:
"It was only when we empowered women to lead that our church grew in number, in the quality of discipleship, and in impact. We were forced to recognise that the most powerful yet untapped human resource in the Middle East and Northern Africa is women. Women are the first to receive visions and dreams, the first to come to faith in Jesus Christ, the first to mature in their faith, the first to lead the men in their families to Christ, and women are first to become life group leaders and lead different ministries.
Men are also indispensable, and the church will not continue to grow without the real involvement of faithful and godly men, husbands and fathers. In a patriarchal society, the need is always to empower women to use their gifts while doing so with great respect and honor to the men in the families. Men do not need to be promoted into leadership in the Arab world, nor do they need to be demoted so that women can lead. Rather, they need to learn how to continue to lead by following Jesus' example of servanthood and empowerment, without losing their gift of protecting and providing for the needs of their family (67)."

On freeing people:
"God wants to restore human freedom. He can use the gift of exorcism, the skills of a psychologist, the experience of a counsellor or the intuition of a pastor to set people free (71)."

On prayer, such a beautiful chapter:
[Prayer in the New Testament ... Christian Prayer and Muslim prayer ... and then, reading The Lord's Prayer from within the context of the Arab World]
"In some parts of the Western world, we have taken "our Father" and dropped "who art in heaven", and in parts of the Arab world we have dropped "our Father" and kept "who are in heaven." Christ came to reveal both truths. I believe that the Arab world, which rightly respects God as "the greatest" is desperately in need of learning to know him as "our Father" as revealed in Christ (83)."
"I would not be exaggerating if I said that almost all the refugees who have entered our church have been full of hatred and thirsty for revenge. Including the women and children. In our pre-school, one Syrian child was almost two years old when he uttered his first word (which becomes three when translated into English): "I hate you" ... Countless times people have told us that after they had given their hearts to Jesus, they experienced not only the forgiveness of their sins but also an immeasurable amount of love for their enemies and a humanly unexplainable attitude of forgiveness towards others (85, 86)."

On developing core values:
"One good way to identify the core values in a church is to look at the people who are most admired in the congregation (104)."
[PS: Please, someone help me. I don't understand the diagram on p106 😕].

On leadership in the local church, being leader-shepherd-manager:
"Leaders can see beyond the present and are able to envision where they want the church to be in twenty years ... They are also capable of discerning looming storms and courageous enough to ride their waves ... Shepherds have big hearts and feel the burden of their people ... Managers can develop leaders and allow things to happen. Managers are great maximizers and great believers in people, but they can hurt many along the way (110; in the next paragraph, Jesus is held up as the example of all three in the one person)."

On suffering, starting with 14 different forms of persecution (112) for those in RCB alone:
"The West sees following Jesus as a form of entertainment. Yes, there is plenty of joy and peace in Christ, but in our region and during the first few centuries of Christianity, it was always coupled with persecution and suffering (113)."
[NB: some wise advice on helping leaders 'avoid unnecessary persecution' - 115-117].

On stewardship:
"(Our Christian businessmen and women) know from experience that while making money is seen as a sign of success, distributing wealth moves us from a life of success to a life of significance (122)."

It is true. This is a book on discipleship and the transformational power of an encounter with Christ as discovered in the stories within a vibrant local church. Now I want to keep a little part of my heart faithful in my prayers for this RCB church and its leaders. In my experience, when a story like this is published and it goes far and wide, it often seems to create opportunities for the devil to create cracks in what God is doing. May it not be so. May God continue to rest his gracious hand upon them.

PS: As I am wont to do with a book of significance, Barby and I like to buy it for our children. They have quite a shelf now. Maybe my highest praise for this book is that I ordered copies for each of them earlier this week!
Email Post
Labels: church leadership preaching spirituality suffering travel

Rachael Ayres said…
Do you happen to have either a list of what you have bought for your children or perhaps a photo of one of their parent-gifted bookshelves?
10:06 AM, May 13, 2019

art of unpacking said…
Ahh, Rachael - why I am not surprised by that question from you?!
I shall make some enquiries among the offspring :).

John Corban said…
Great book Paul - I finished it and gave it to Jamie to read - I'm sure it would be useful for his church plant! What a delight for this part Lebanese guy to see a Lebanese Langham Scholar doing such amazing stuff!
11:24 AM, May 17, 2019

Paul said…
It is a good time to soak up the Lebanese heritage, my friend. And I managed to write an entire post without mentioning Yassir's testimony on pp23-25 - that is a good place to start. I'm sure you will be showing the latest Scholar's video to all and sundry, with it being about Hikmat and this same church...

Working on a cricket-themed post, with the big event coming up fast. I know I'll have one reader. At least the games are not during work hours - right, John?