On the morning of 20 August 2018, I unfolded The Times of India - and I gasped.
Why?
This is what extended across the full front page: 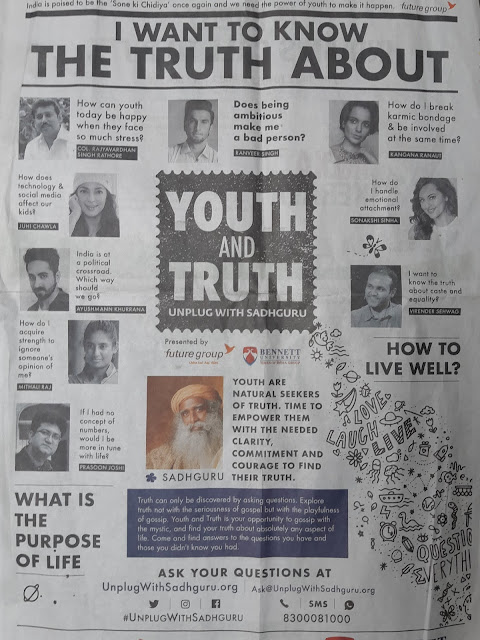 The initial gasp was due to my instinctive response: 'this would never happen in New Zealand'. The delayed gasp originated with the boldness of the words. Let me repeat them here:

"Youth are natural seekers of truth. Time to empower them with the needed clarity, commitment and courage to find their truth. Truth can only be discovered by asking questions. Explore truth not with the seriousness of the gospel but with the playfulness of gossip. Youth and Truth is your opportunity to gossip with the mystic, and find your truth about absolutely any aspect of life. Come and find answers to the questions you have had and those you didn't know you had."

For almost two months now, I've been enjoying the ride, fascinated by what has emerged in The Times of India. I don't know how 'legit' Sadhguru is within the majority faith tradition of this country. But - actually? That isn't a major issue for me as I've taken the journey with him.

On a weekly basis (I think) Sadhguru has contributed an article in a 'First Person' column.
Here are two examples: 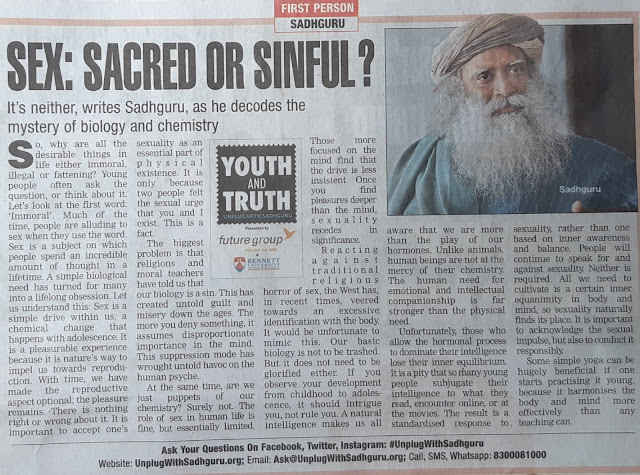 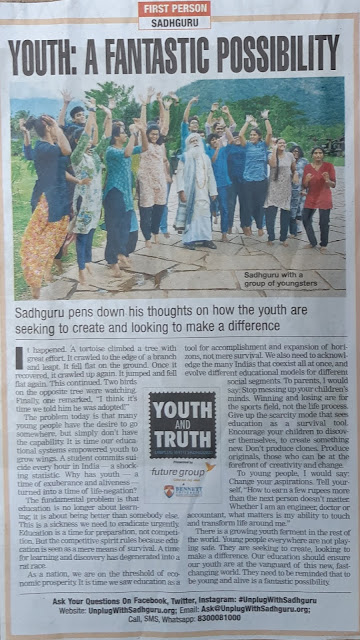 That is a weekly column, but the real fascination for me is what has happened on a daily basis. And almost two months later, it is still happening on a daily basis. Starting with the questions from the more famous people on that first cover page in August, each front page has had a little box with a question - to be followed by Sadhguru's response on page 2 or 3, also in a little box. Here are three examples from the 20th August page (a cricketer and a couple of Bollywood actors - what other combo could get us started effectively in this context?!): 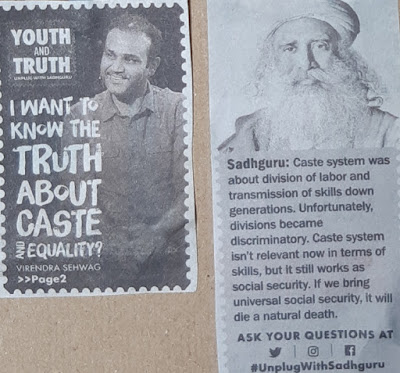 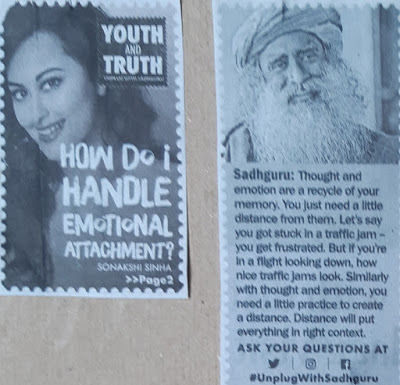 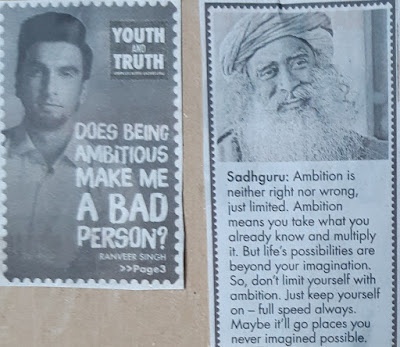 With momentum established in this way, there followed a nationwide tour: 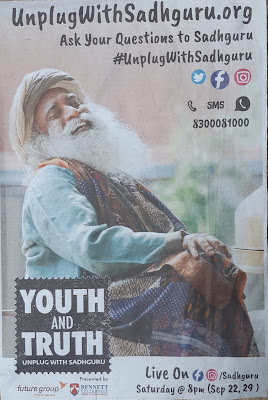 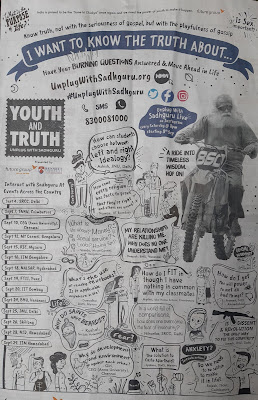 As a result, the questions have poured in, both from celebrities (surprise, surprise - another actor and another cricketer) and then from common people: 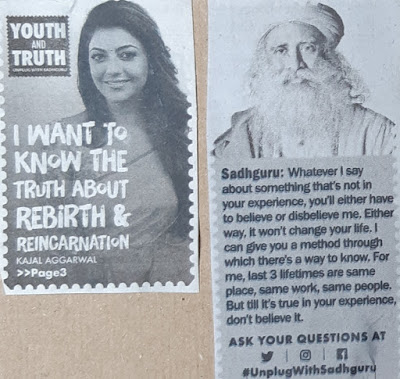 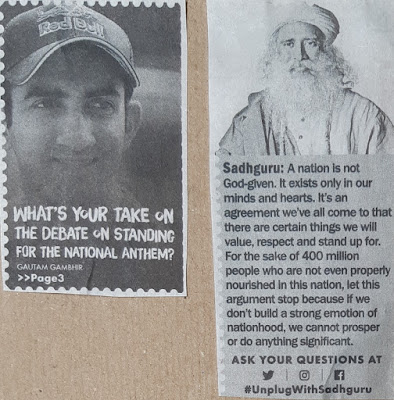 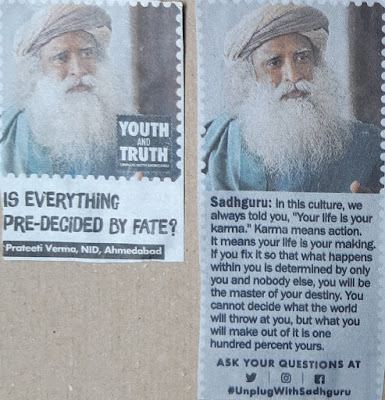 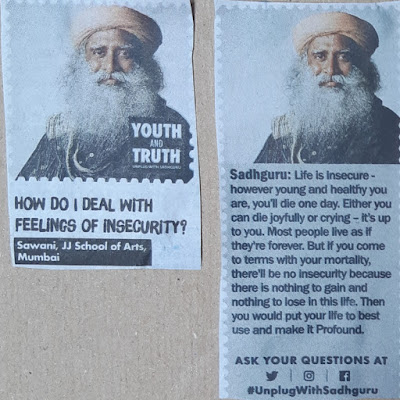 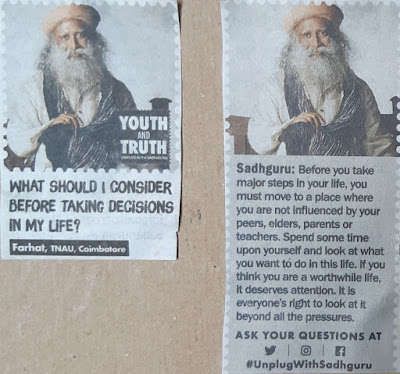 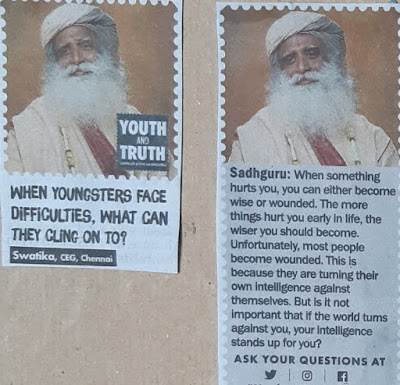 Incredible, isn't it?
What do we make of it?

Some immediate reflections. There must be some wealthy people standing behind this initiative! I don't tend to do background research with these posts, but 'Future Group' is a multibillion dollar conglomerate into things related to lifestyle and fashion. So they'll have their economic motivations to be involved. But I wonder if there is more going on here?! At the very top of that very first page, there is a sentence: "India is poised to be the 'Sone ki Chidiya' once again and we need the power of youth to make it happen". That phrase means, literally, "Golden Bird"- but figuratively, much more is going on. [NB: here is a cool little youtube video on the phrase - https://youtu.be/t0yW6BhKAS4]. It was a phrase used to describe India, with all its staggering wealth and resource and potential, before all this got stripped away by (mostly white) colonialists. The obvious example? The Kohinoor diamond sits in the Crown Jewels in London! So to have an opening line like this one - 'Sone ki Chidiya' once again - is to feed the hopes and aspirations of a younger generation. Maybe this is another faith tradition concerned about its exiting "millennials" and the motivation here is to draw them back in by demonstrating the relevance of the faith to life's big questions?

I am drawn to the Wisdom tradition on display here. All the major faiths have one and it is around this tradition that many an open conversation can be had. For example, in this context I've often described the writer of Ecclesiastes (Koheleth) as a guru-sage on his deathbed, or charpai, grieving the passing of achhe din, or 'the good old days' - and desperate to pass on what he has learned about life to a younger generation. There is a lot of 'Youth and Truth' going on in Ecclesiastes! Koheleth and Sadhguru have the makings of a fascinating friendship and conversation. Yes, they would hit some stumbling blocks along the way - for example, Jesus as the fulfilment of the Wisdom tradition - but that is OK. The can agree to differ. The conversation can happen.

Once the conversation is under way, my imagination wanders over to Acts 17, Paul in Athens. Why not try to have this Paul linger with guru-philosophers in the twenty-first century media in a similar manner to the way that Paul lingered with guru-philosophers in the first century marketplace? Initially and instinctively, why not see these Sadhguru texts as a place from which to commence, like in Acts 17, rather than a problem to condemn, as in Romans 1? The latter is likely to come later, but why the rush? Why not 'minister to their searching' (Willimon)? Why not guide, gently, their groping? Why not channel their 'feelings after truth' (NT Wright)? Are we flexible enough to start with these texts and then are we creative enough to get from them to the truth?

PS: That is quite a line, isn't it?
"Explore truth not with the seriousness of the gospel but with the playfulness of gossip."
-->
Email Post
Labels: culture media mission pluralism preaching spirituality

Sheila Pritchard said…
Amazing and wonderful! Thanks for you reflections on it too, Paul.
7:30 AM, October 12, 2018

Heather said…
It is astonishing to me to hear of a newspaper willing to go near such questions! I initially wondered if it was because India is a more homogeneous society than here, but it can't be... not with its huge Muslim minority and great diversity of languages and cultures. Do you have thoughts on how such a thing is possible?
11:54 AM, October 13, 2018

Actually, I've developed a worksheet for my students next month where they will practice a more inductive approach to preaching, by using the Sadhguru-text as their starting point - and getting from there to the gospel (without too much of the "gossip", I hope).

I hope you are travelling well.

Paul said…
'Astonishing' is the word, Heather - particularly for us Kiwis.

When there is a lull in a seminar anywhere in Asia, I have been known to digress and talk about NZ's "no religion" numbers in its latest census. Spark some life. It works well. People's mouths drop and their expressions become surprised. In cultures where religion is inherent to identity, they have no way of computing how 'no religion' can even be possible. We Kiwis/Westerners, who so often think we are at the cutting edge and leading the way, need to remember that on this point we are out-of-step with the vast majority of the world. On a global scale, our commitment to 'no religion' sows the seeds of a great irrelevance.

You are right. India is so diverse, so heterogenous. All the major global religions have deep, deep roots in its soil. Buddha was born here! While the constitution is a subject for great debate, it does preserve India as a secular state which simply means that there is space for all faiths - and all faiths tend to be here.