As a New Zealander, I will continue to remember ANZAC Day (25 April, tomorrow) each year - but as a Christian I have decided to remember the Armenian Genocide (24 April, today) as well. The latter started the night before the former in 1915. The former is about a slaughter of thousands of Aussies and Kiwis in fields and cliffs and trenches as they invaded a foreign country, while the latter is about the slaughter of hundreds of thousands of Armenian Christians in fields and mountains and deserts as they were deported from their home country.

Here is a map of the countries (in dark green, with light green signifying some sort of 'regional' recognition, whatever that means) that fully recognise the Armenian Genocide. Not so many of them... 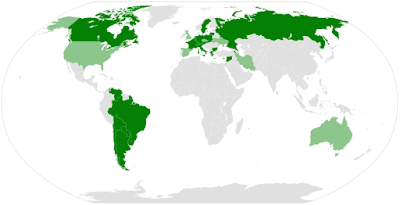 I guess this map bears witness to the influence of Turkey in the world today. There are so many countries wanting to keep in good standing with them. Although I do expect far more from my own country, sitting there as a grey comma on the bottom-right corner of the global page. Shame on us! 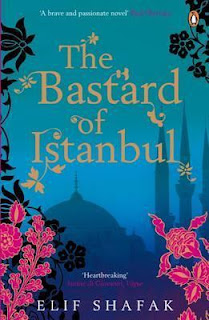 Building up to this year's commemoration of the genocide, I read Elif Shafak's The Bastard of Istanbul. How good a writer is she? Just exquisite. It is a story with different layers to it.

Foodies will love the way each chapter is given a food title (Cinnamon, Garbanzo Beans, Dried Figs, Golden Raisins etc) - with that specific food mentioned in passing in the chapter, but then with these foods feeding into a recipe later in the book.

Another layer has to do with families, two of them - with the focus on a young woman from each one. The author lingers, again and again, in her descriptions of people: their appearance, their character, their secrets, their hopes etc. I felt myself drawn irresistibly into these two sad and dysfunctional family circles.

Another layer?! Well, you guessed it. One family is Armenian Christian and the other family is Turkish Muslim. The genocide is the backdrop to the way their lives become separated and then intertwined down the generations and across the oceans.
[NB: the plot shares a feature with the recent Broadchurch series - and so not for the faint-hearted].

This morning I woke to a link posted on facebook by a friend, with photos of the genocide (the map above is from this collection of photos). This is what prompted me to drop what I was doing and to write a quick post to highlight this day once again. Grainy. Black-and-white. Authentic. Take time over each photo, with the descriptions and the narrative. Don't rush it.

I know what I hope 2017 will include. This new movie on the Armenian Genocide, The Promise. The early reviews are not that convincing, but amidst my traveling (I don't expect it to be in Indian theatres) I hope I have the opportunity to see it.

nice chatting at the start of such a sad couple of days.