If' you are looking for a story of political intrigue to consume you through 2014, look no further than India, the world's largest democracy. I can't wait to open my newspaper each morning.

Are you in for the ride? Can this dummy give you the dummies guide?
I know you don't think it is relevant - but then I don't think that highly of relevance, so that one doesn't work so well on me. Be good and stick with me here. You'll love it.

In one corner there is the Congress Party...
This is the party of a family dynasty in India. Remember Mahatma Gandhi, right?! He is the one who made life so tough for the British that they had to go home. Was there a greater force for political good in the twentieth century? I doubt it. But Gandhi was assassinated a few months later and it was Jawaharlal Nehru who became the main man - and the first Prime Minister of India, as President of the ruling Indian Congress Party.

[This is one of the places where you have to have some empathy for Pakistan. Nehru had 16 years as a revered Prime Minister, establishing the country. His equivalent across the border, Mohammad Ali Jinnah, had barely 13 months...]

Check out some life stories. Indira (by Sikh) and Rajiv (by Tamil) were murdered by extremists (both while serving as Prime Minister). As a younger man, Sanjay died in a plane crash above Delhi - a handful of kms from where our home was - right at the height of his ruthless influence. After Rajiv died, Sonia became President of the Congress Party and won not one - but two - national elections. Largely because she is not Indian-by-birth, she handed the office over to others, with Manmohan Singh being the most recent, and current, Prime Minister.

Coming now into the present. Last week Manmohan Singh announced his resignation (at 80+ years of age) and what about this next week? Yes, you guessed it. People are expecting Rahul Gandhi ('RaGa'), now old enough, to take on the Congress leadership and be their candidate for Prime Minister later in 2014.

But there is a little problem. Well, two related ones. One is that the tide ebbs and flows with the Congress Party - and at the moment it is seriously ebbing. Related to this, it appears that charisma has gradually leaked out of the dynastic line. RaGa is not very inspiring. He does not seem to have the presence of his great-grandfather. Interestingly, guess who drifted into the public eye this week? You are so clever ... Priyanka!

In another corner there is the BJP Party...
The recently appointed leader of the BJP is Narendra Modi (or, 'NaMo', for short. They love acronyms here in India. With this approach the NZ Prime Minister, John Key, becomes JoKe). The BJP has a Hindu fundamentalism identity. Onto this NaMo latches an effective track record, according to supporters, in governance and business while he ruled the state of Gujarat (the Mahatma's home state, by the way). NaMo brings all this to the masses as an older man who is a fiery orator wrapped up in a charismatic personality. It is a potent combo (Hindu identity + business acumen + personality) with wide appeal. So different to RaGa. NaMo is always having RaGa on about needing the family dynasty - shehzada!

However NaMo has this massive dark spot in his past. It is horrid. Ten years ago, while Chief Minister of Gujarat, these anti-Muslim riots occurred in which hundreds of people lost their lives. Everything about NaMo - at the time and ever since - seems so non-committal. But the Americans, for example, are so convinced of his involvement that they will not grant him a visa. Many Indians still come to similar conclusions.

So NaMo is popular (to some), but scary (to others).


How are we doing? Are you still with me?! I hope so.
We've put RaGa and NaMo in their place - but that is about it.
I haven't even got to the good bit yet.

First you have to remember a couple of things about India. One is that in its diversity it is a bit like Europe, but far bigger, with more languages, cultures - and people. How it all hangs together is a bit of a mystery to me. The other thing has to do with its governance. A bit like the USA and Australia, India has both a federal and a state system. The same political parties offer candidates in both systems of elections, with the state ones often giving an indication of how the national one will go.

Here is where it has become so absorbing in the last few weeks.
Here is why I can't wait to get to my newspaper.
At the moment NaMo and RaGa are struggling to find a good headline for themselves.

In a third corner is the Aam Aadmi Party (AAP) - which means 'common man party'.
It burst on to the national stage before Christmas when 4-5 states had their elections. Everyone was expecting the BJP to do well and the Congress to do poorly - and that is what happened. But in the state of Delhi (which is the place from which the country is governed nationally as well), the AAP entered the election. A new and tiny party, at best. Their political platform is based around attacking corruption and getting a better deal for the 'common man' (starting with water and electricity). Their leader is this ex-IT guy (and yes, he does look a bit nerdy and geeky - apologies for those offended by the stereotypes) called Arvind Kejriwal. He rides to work on public transport. He lives in a modest home. He eschews security personnel hanging off him. The broom, sweeping away dirt, is his image. All his followers wear this little white topi, or hat. When he speaks it is calm and sensible.

AAP didn't win the most seats in Delhi. BJP did (32, up 9) - but not enough to govern. In coalition with a decimated Congress Party (8, down 35), it quickly became clear that the AAP (28, up 28) could and should rule. It was the 'unthinkable' outcome. And so here is Arvind Kejriwal (I haven't seen ArKe in the media yet - but why don't we start a little trend, shall we?!) as the Chief Minister of Delhi. 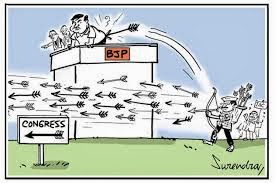 ArKe is the anti-politician. It is 'politics from below'. He is the architect of 'a hitherto unthinkable political revolution that does not derive its power from religion, caste, class, or cadre.' He believes in holding public referendum as a means of listening to the public. It is 'politics growing from the heart, not from a thesis'. Within days of taking office, the initiatives are flowing. For example, a HELPLINE for those confronted by people asking for bribes. It has been inundated. I wonder what new initiative this day will bring.

You don't have to be a political scientist to pick what is happening in this country. Hundreds of thousands of people are signing up. It is galvanising a younger generation with the same sort of energy that the Pope is doing in Catholic circles. The pressure is on the AAP to set up party structures outside the state of Delhi. And the big question? Does the AAP have enough time to wield influence in the national election later in 2014? It is gonna be a fun space to watch.

Who knows what will happen? Not me!
I don't mind having a crack at a dummies guide - but a discerning guide is not really an appropriate assignment for a guest, like me, in the country to make.

Unknown said…
Wow that is so interesting. Please keep us informed of developments
9:49 AM, January 21, 2014

art of unpacking said…
When you stand for what AAP stands for, you are going to create all kinds of enemies in high places who will become obstructive ... and that is what is happening. They are struggling to gain the traction they'd like.
10:30 PM, February 09, 2014