Some conversations are for keeping.

Dinner with Conrad... in England.
It was a cold wet night in Sheffield. I was perched at the end of a long table in a restaurant on a night set aside to celebrate the contribution of Jonathan & Margaret Lamb to Langham Partnership. Next to me was a new member of the international council - the Zambian leader, Conrad Mbewe. (Conrad blogs here. Wander around youtube and you'll find clips of a powerful preacher. I won't mention the ones which refer to him as 'the African Spurgeon', as it must be a cause for embarassment to him).

Anyhow, I'm pretty stoked to be sitting where I am sitting. The questions lining up in my mind are turning into one of those Indian queues, with each one pushing and shoving its way to the front. Family. Ministry. Testimony. ... and then we arrive at Conrad's doctoral studies.

Before that... in Zambia
Conrad introduces me to Olive Doke. Never heard of her. 56 years as a missionary among the Lamba people in Zambia. An integral part of Conrad's spiritual inheritance. A single woman. She deserves 'a biography that can be put side by side with those of David Livingstone and William Carey'. Actually Olive is related to Carey through her mother. She is Olive Carey Doke. At her funeral the minister honoured OCD by preaching on OCD: Obedience. Consecration. Devotion. When Zambia became independent in 1964, guess who was 'asked by the new African political leaders, as the only woman honoured guest, to lead the procession into the Anglican Cathedral in Lusaka'? Olive Doke.

But let's hurry on to Conrad's thesis (which, in the intervening months, has been accepted - congrats, Dr Mbewe!). It tracks the relationship between a pioneer missionary (Olive) and an indigenous leader (Paul Kasonga) and how paternalism shifted to partnership because of the mutual respect and admiration shared between these two very different people. Adding poignancy to the story is the fact that Paul suffered from leprosy and had periods of time when digits and limbs were wasting away, or even dropped off.

Paul became 'the acknowledged African leader of the Lord's work ... in the whole of Lambaland', with Olive working alongside. On one occasion, while all the missionaries were on furlough, and Paul was left 'in charge' - a little revival broke out. Don't you love it when that happens?

After Paul died, Olive wrote his story: Paul the Leper - Apostle to the Lamba. [Yes, it has been ordered]. As Conrad asks, 'Where do you find missionaries writing biographies of indigenous leaders today?' Or, what about missionaries choosing 'a leper to be the first official local leader of the church'? When Olive died (at 80 years of age), her people buried her next to Paul.

Before that... in South Africa
In the thesis Conrad pauses, on more than one occasion, to reflect on the heritage in which Olive was raised. Her grandfather (William Knibb) was a missionary at the heart of the struggle against slavery in Jamaica ("yes, Martin - you can wikipedia him" - forgive me, just a little aside to my son). Her uncle died as a missionary in the Congo. In her teenage years, Olive lived in Johannesburg where her Dad, Joseph Doke, was the pastor of the Central Baptist Church. When she was 16 years of age, her parents welcomed Mohandas K (later, Mahatma) Gandhi into their home. He had been assaulted, left unconscious, by some of his own people (Pathans) who wanted him to advocate a quicker, more violent, solution to the oppression of Indians.


Mr Doke and his good wife were anxious that I should be perfectly at rest. They therefore removed all persons from near my bed. I made a request that their daughter, Olive, should sing for me my favourite Christian hymn, Lead Kindly Light. Mr Doke called Olive and asked her to sing in a low tone. How shall I describe the service rendered me by the Doke family?

Joseph Doke became Gandhi's close friend and first biographer. On return from Sheffield I was determined to probe this story further. A leading Indian historian (Ramachandra Guha, whom I had encountered in his history of Indian cricket) was about to follow up his classic on Indian history, India after Gandhi - with a prequel titled Gandhi Before India. You gotta love a guy who can come up with titles like that. I am almost finished it. Central to those formational years was Gandhi's friendship with a number of Jews and Christians in his inner circle, especially the Doke family (... such a shame about the 'Christian' Briton and Boer oppressors who stuffed up the witness of the Dokes). After being nursed back to health in their home,


Gandhi became very attached to the Dokes, to the father and daughter in particular. After he had left their household, he would, from time to time, send Olive playful notes ... . These letters reveal an unexpected tenderness in a man whose missives to his own sons were far more censorious and prescriptive (Guha, 275). 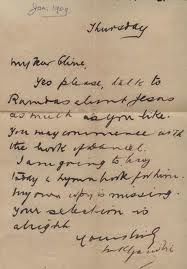 Gandhi maintained this personal correspondence with Olive for many years, always starting his letters with 'My dear Olive'. Conrad Mbewe writes, 'In a country that was already divided along racial lines, this friendship taught Olive that someone's skin colour was not important. What mattered most was character. This was to help Olive when she later met Africans like Paul Kasonga'. Or, again, 'Doke learnt lifelong lessons in her home as she saw her parents treating people of a different race with respect - against the very attitude that was prevalent in their own community'.

I know what many of you are thinking... To the Western mind, all sorts of questions hover around these two relationships with Paul and Gandhi. It is at the heart of Olive's intriguing story. Conrad signals, rightly, that a further area of research is 'the dangers in male:female intimacy'. As for me, I am willing to let OCD be OCD and give her the benefit of any doubt!

Before that... in New Zealand
Although originally from Britain, the Doke family went to South Africa from New Zealand where they had arrived in 1894. Olive was 3 years of age. They answered a call to Oxford Terrace Baptist Church (Christchurch) in the same year that the celebrated preacher and author, Frank Boreham,  arrived in Mosgiel. Doke was Boreham's mentor. Boreham wrote Doke's biography, The Man Who Saved Gandhi, which is serialised on the Frank Boreham blog. It is no surprise to discover that in his few years in Christchurch, Joseph Doke was at the forefront of the fight for justice for Chinese immigrants in Christchurch.

One day in the Oxford Terrace Baptist Church, as Frank Boreham preached, a little girl (12 years of age) gave her life to Jesus. She tells some of the story in this little piece. Her name was Olive. The OCD journey had begun - and look where it took her. Gandhi. Kasonga. Mbewe ... and now me - and you, I pray. This is the way God loves to work. Small beginnings. Slow fruiting. We just never know what God is going to do through us and that is why it is crucial that we trust and obey all the way home. 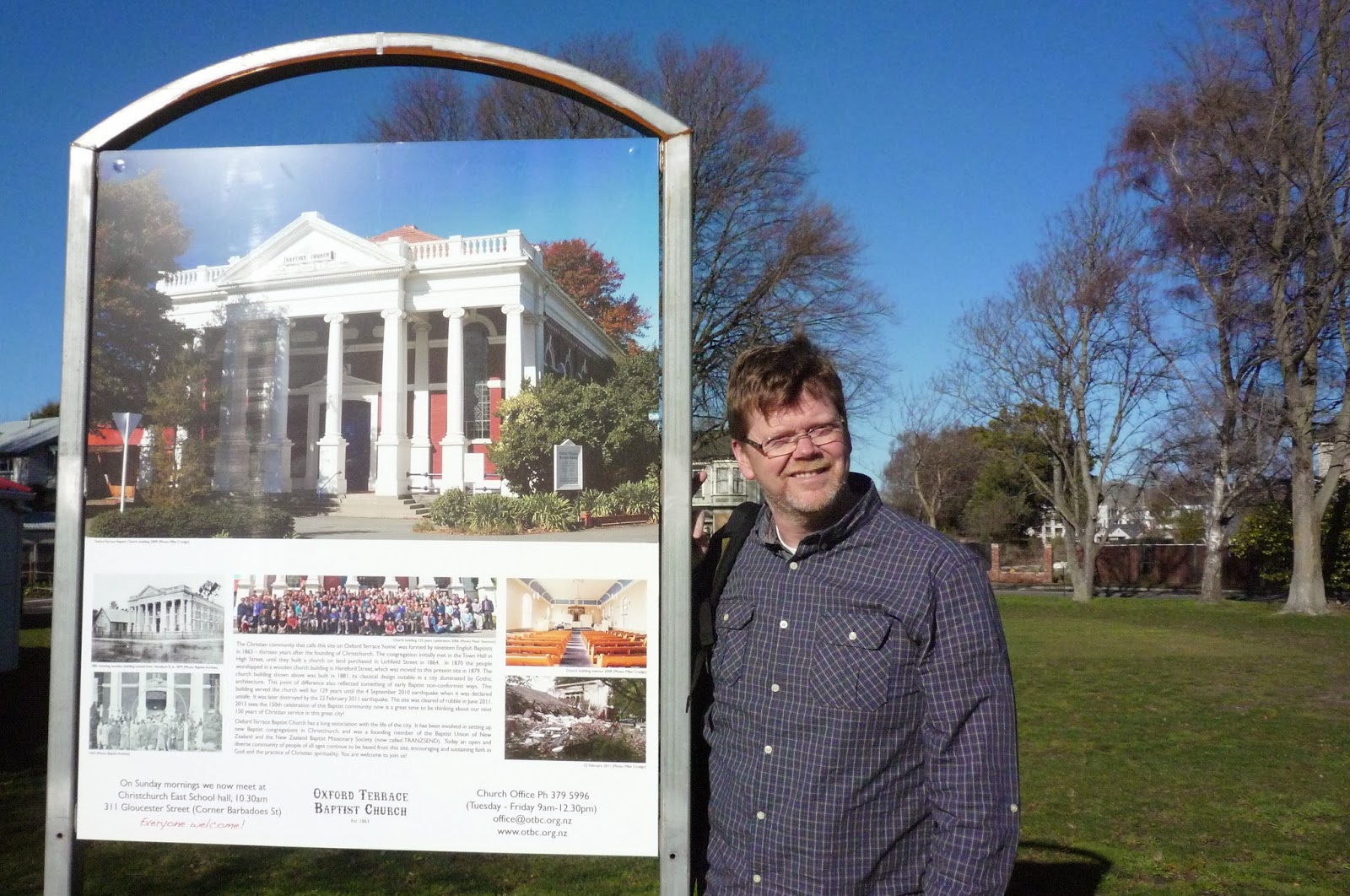 postscript
Oxford Terrace Baptist Church is one of half a dozen NZ churches that support, financially and prayerfully, Barby and I in our work with Langham Partnership. Its church building was destroyed in the February 2011 earthquakes. Here I am, in July 2013, standing next to a sign at the front of a largely empty plot of land where the grand building once was. But the living church continues on. More Olives are ripening, even in your orbit. Attend to them. Love them. Nurture them. Believe in them - for the sake of Christ's mission in the world.

nice chatting - gee, it was really nice chatting.
I've been looking forward to this one for weeks.

Anonymous said…
How like the Holy Spirit (!)to direct me to read this. Have been reading life of W.Carey for last several weeks --okay, several biographies, his journals, letters, etc...all at the same time--and have come to love his humble passion for souls, for the gospel. And my interest in Gandhi goes way back. Thank you for the interesting article and the links to what I expect will prove just as satisfying. I want to learn more of this OCD!
6:16 AM, January 17, 2014