dancing in the glory of monsters 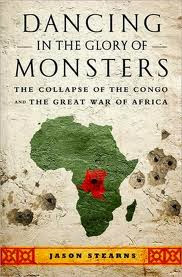 'We do not care about a strange war fought by black people somewhere in the middle of Africa' (334). So writes Jason Stearns in Dancing in the Glory of Monsters (2012).

It is hard to argue with him. Truth be told, I don't expect many of you to go on and finish this post.

Built on face-to-face interviews with witnesses, a new one introduced in each chapter, Stearns tells the story of 'the collapse of the Congo' in three successive wars which followed in quick succession after the Rwandan genocide in 1994. This is seriously good story-telling.

His purpose is 'to tackle Congo reductionism' (xxi), that unwillingness to leave the causes of the conflict to be as complicated as they are - preferring, as we do, an 'array of caricatures' (4) because it is easier. But it is complicated. We need to persist where others have fallen away. Since 1996 five million people have lost their lives in the Congo.

It is a story with a 'deep history' (4). But because I want you to read the book, I need to subvert the paralysis which complexity creates. Let me distill for you just one of the conclusions, draw your attention to a single image, and then gather a bunch of comparisons where the unknown is related to the known (for you and me). A neat threefold strategy for engaging complexity.

a conclusion
Our eldest son works among Congolese in Kampala (Uganda) and Goma (DR Congo). Independently from Stearns, he draws the same conclusion. There is some irony in it. What can so frustrate us, bureaucratic government institutions, is exactly what Congo doesn't have - and needs. There are no functional institutions. Stephen joked on the phone last night about 'Yes, Minister' and the British civil service. But the genius of that system is that the civil service stays while governments come and go. Congo doesn't have that luxury. Ethnic rivalries, regional politics, and big personalities win the day. Near the end of his book, Stearns observes


'Perhaps the most nagging, persistent problem I have witnessed while researching and writing this book has been the lack of visionary, civic-minded leadership' (328).

In this system loyalty is 'more important than integrity' (175) and is valued 'more than competence' (272). All the way through he alludes to this deficit in the Congo. Good leaders at the helm of effective institutions? 'This legacy of institutional weakness [is] for many Congolese almost as depressing as their physical suffering' (126). Leaders view 'the state apparatus as a threat, to be kept weak so as to better manipulate it' (126). Ethnicity is the fiercest ideology: 'it will take generations to rebuild institutions or social organisations that can challenge the current predatory state without resorting to ethnicity' (216). The Congo needs 'a free press, an independent judiciary, an inquisitive parliament' (283) that is able to 'dig deep and scrutinise information' (282-283).

And there is deep history behind this. Be slow, very slow, to allow your mind to assume that there is 'some genetic defect in Congolese DNA, a missing 'virtue gene'' (215) of some kind. The Belgian colonialists must take a lot of heat for this. Having 'dismembered what remained of most Congolese kingdoms' and then creating 'a colonial state whose purpose was to extract resources ... the colonial authorities handed over government to a Congolese people almost wholly unprepared  to manage their vast state' (330).

an image
Did you have lingering look at the book's cover image above?
[NB: also the images, by way of video, posted last year might be helpful]


'Like layers of an onion, the Congo war contains wars within wars' (69).

On allusions to World War II and the Holocaust:
'There is no Hitler, Mussolini, or Stalin. Instead it is a war of the ordinary person, with many combatants unknown and unnamed, who fight for complex reasons that are difficult to distill in a few sentences' (5).
'Unlike the holocaust of Word War II, which had been carried out by a select group of state officials and army officers, largely away from the view of the population, Rwanda's genocide was organized by the elites but executed by the people ... the killing took place in public places' (15).


On the similarities with a Europe from another century:
'It was more like seventeenth-century Europe and the Thirty Years' War than Nazi Germany' (6). 'The Congo of today is in some way more similar to the sixteenth-century Italy of Machiavelli - and its court intrigues comparable - than to any modern twenty-first century state' (330-331).


'Lies come up in the elevator; the truth takes the stairs but gets here eventually' (xxvi)

On Congo being lost in the headlines given to other conflicts:
'The New York Times, one of the few American newspapers with extensive foreign coverage, gave Darfur nearly four times the coverage it gave the Congo in 2006, when Congolese were dying of war-related causes at nearly ten times the rate of those in Darfur' (5).
The Kasika massacre provide some of the most horrific pages (251-261). Kasika was given the nickname 'Kosovo' after the people heard what was happening in the Balkans. 'The main difference was that the press was giving the small Balkan region, barely a sixth the size of South Kivu province, nonstop coverage, while no foreign journalist visited Kasika for a decade' (261).

On assessing how Rwanda can be so influential:
'the size of Massachusetts' (13) ... 'a Lilliputian neighbour' (11) ... 'a peanut of a country' (133). 'No one imagined that Rwanda, a country ninety times smaller, could seriously challenge Zaire - in terms of size it would be like Switzerland trying to conquer all of western Europe' (57-58). But that is exactly what happened. They invaded and went all the way to Kinshasa which is 'similar to walking from New York to Miami through swamps and jungles and across dozens of rivers' (55).


'The Rusizi Plain became like white snow with UNHCR tents' (66).

'a thousand people lived in the space of a soccer pitch' (37).

On the reality of 'proxy wars':
There is 'an alphabet soup of rebel movements' (51). 'Almost every single Congolese rebel group was helped on its way by an outside patron' (232). At one point Uganda and Rwanda fought a war with each other on Congolese soil through different domestic rebel militia groups. These proxy wars are what 'caused the most suffering for civilians' (250). How is this possible? 'The international community was inherently hostile to foreign invasions but turned a blind eye to domestic rebellions that called themselves liberation struggles' (53).


'the doormat of Central Africa on which visiting armies clean their shoes' (331).

On dealing with the refugee problem after the genocide:
It 'was like doing brain surgery with oven mits' (335-336). Maybe 600,000 Rwandan Hutu, walking a thousand miles in 'one of the longest mass treks in modern history' (129), were 'airbrushed from history' (128) when, in reality, they were tracked down and thousands murdered in cold blood out of fear that one day they may return home. 'No other image plagues the Congolese imagination as much as that of the Tutsi aggressor. No other sentiment has justified as much violence in the Congo as anti-Tutsi ideology. Again and again ... the Tutsi community has taken centrestage, as victims and killers' (79).

On the importance of understanding Congo 'on its own terms':
'The Congolese tragedy certainly has something of a car-wreck attraction to it' (327). 'The Congolese war spun its leaders like a centrifuge' (203). Its political system 'rewards ruthless behaviour and marginalises scrupulous leaders. It privileges loyalty over competence, wealth and power over moral character. Well-intentioned leaders ... are spun to the outside of this centrifuge, while the more guileful ones stay at the center' (331).
'Sometimes it seems that by crossing the border into the Congo one abandons any sort of Archimedean perspective on truth and becomes caught up in a web of rumors and allegations, as if the country itself were the stuff of some postmodern fiction' (282).
'The Congo war had no one cause ... Like an ancient Greek epic, it is a mess of different narrative strands - some heroic, some venal, all combined in a narrative that is not straightforward but layered, shifting and incomplete. It is not a war of great mechanical precision but of ragged human edges' (336).

'The evening news on state television began with Mobutu's head descending from the heavens through the clouds' (154).

a response
Given the complexity, I'd start the book by reading 'Conclusion: The Congo, On Its Own Terms' (327-337). It helps develop some needed pre-understanding before launching into the narrative. It will help to read 'We should not despair' (336) before you begin.
He also asks, 'Why should we help?' (332). One reason is that we owe it to the Congolese in that slavery, colonialism, exploitation creates a 'moral debt' (333). Another is to give them the opportunity to decide how 'to deal with their violent past' (333) and figure out how to pursue both justice and peace.

A major frustration with the book - grrrrrr! - is the mention of so many places without an adequate map. But googlemaps came to my rescue...

not such nice chatting this time

Tim & Lizzy said…
Thanks for exposing my ignorance Paul. Yes, I knew of the war in Congo, but didn't know half of the details you've summarised. Sobering.
8:46 AM, December 16, 2013

Heather said…
May I reccomend Tim Butcher's Blood River, too (http://www.bloodriver.co.uk/). It's written by a journalist who travelled the length of the Congo River in 2004. It's a story, rather than a systematic work like the book you're recommending, but it's well told. The story of a man who spent the day Butcher was leaving getting drunk in order to gather his courage to ask Butcher to take his young son with him (so that his son could have a chance at a decent life, but meaning that he would never see him again) continues to haunt me. Chances are that boy is dead now.

Since reading the book, DR Congo has been on my prayer list. I pray that God will raise up for them leaders and a government who will govern for the good of all; and that other countries will only intervene in DR Congo for the good of its people and not to further their own ends and continue to destabilise it.

We've been reading some advent reflections that look at God coming as the Redeemer who tramples down evil and evil-doers - whose garments are splattered with blood like the garments of someone treading grapes. As I think of human trafficking, as I think of the Congo it's that side of God that I long for. Come, Lord Jesus!
10:39 AM, December 16, 2013