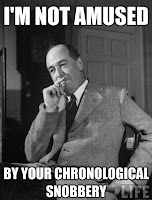 So clear is the memory of my first sighting of the phrase 'chronological snobbery' that it took me just 14 seconds to find it again - 25 years later. It comes up in JI Packer's final chapter in the book edited by Carson & Woodbridge, Scripture and Truth. The phrase originates with CS Lewis and Packer describes it like this:


'... the supposition that what is most recent will always be wisest and best, and that the latest word is nearer to being the last word than any that went before; those under the influence of this assumption do not seriously consult work done prior to our own time and that is very much to our loss' (Packer, in Scripture and Truth, 353).


Wikipedia even lists a 'chronological snobbery fallacy'! It goes like this:
1. It is argued that A.
2. A is an old argument, dating back to the times when people also believed B.
3. B is clearly false.
4. Therefore, A is false. 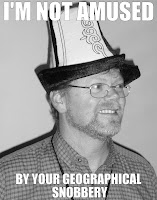 
'... the supposition that what is most familiar will always be wisest and best, and that the distant word is less likely to be the last word than any word from nearby; those under the influence of this assumption do not seriously consult work foreign to their own culture and that is very much to our loss'.


Wikipedia doesn't list a geographical snobbery fallacy (well, not yet anyway?!). When it does it might go something like this:
1. It is argued that A.
2. A is a foreign argument, from a culture where people also believe B.
3. B is clearly false.
4. Therefore, A is false.

Chronological snobs forget the enduring worship imperative that calls us 'to remember'. Geographical snobs forget that 'from one man God made all the peoples of the world' (Acts 17.26) and the inherent value and equality that this ascribes to people unlike me. Chronological snobs tend either to ignore history, or to revise it to fit with our own image. Geographical snobs tend to ignore whoever might provoke us into 'seeing ourselves as others see us' (Robbie Burns) - be it the missionary on home leave, or the immigrant learning to live among us.

Hallelujah! I have never left a comment on any blog - except my son's before - but Preach it Paul!

recently while checking the credential's of a theologian - i paraphrase here - his comment was that the universe is a lot bigger than we previously thought, therefore our beliefs about God have to limit God to being part of the universe, rather than outside it, because the God of the Bible is personal and thus cannot be big enough.
obviously it sounded so much better when he said it - but it boiled down to - I can't believe it so it can't be true!
I may have to subscribe to a blog at last. :)

We had a bishop from Rwanda visit our church in Australia a few years ago and our minister asked him what holes he sees in our Western form of Christianity. It was a great question that cut the same place you are cutting in your post.

I wish I had taken more notice of his answer. But the part I recall was how we just buy into a materialistic world and there's no distinction between Christians and our not-yet-believing neighbours.

We are called to be distinctive in our generosity like Christ, not invisible in our consumerism.

I agree, but I find it hard to do. We Westerners have so much power: we control the famous publishing houses and the prestigious theological schools. It's hard to listen to ideas that come from a 'backwater' and easy to assume that the speaker bringing 'foreign' ideas simply isn't very well-trained/informed It's even hard to hear such ideas at all, as thinkers and scholars from the Majority World tend not to be backed by the same kind of 'machine' that backs (some of) their Western counterparts.

I appreciate Vinoth's blog, but he's mostly saying things I agree with anyway, so it's not very challenging - plus he's very familiar with the West and can speak in our terms. I know I have much less sympathy with African preachers who I occcasionally hear on the BBC speaking about the evil of homosexuality. or the Pacifika pastors who I'm apt to assume are fleecing their flocks... I know that they have as much access to the mind of God as I do, and I know that I should be as willing to assume that they approach the Bible humbly and openly as I am to assume that of a white preacher, but I know also that I don't always put that into practise.

Thanks for the reminder.

Paul, this is an acute and important observation and challenge.

It's acute because it pinpoints an arrogance that your politely call snobbery. The arrogance of the "indigenous" to dismiss the voice of the "foreign" as irrelevant has left us somewhat distanced from one another where there is no need for it. It cuts cross-culturally but cross-generationally too: we need to re-learn listening.

It's important because where we allow such foolishness to have space - and in idiocy grant it some power as being 'true' - we become hobbled in missiological endeavours: unwilling to receive help and unwilling to go to help. We build unassailable glass walls to keep out the 'foreign' and keep the 'indigenous' at home.

Good to have this engagement from you folk - on what is an issue that comes to mind very often indeed.

So, thanks, Carol for your enthusiasm. And, Brad - when that level of leadership (like a bishop from Rwanda) comes visiting, to question him about 'holes' (and I would add 'blindspots') is just so important. It will be among the most relevant and prophetic (two issues of great concern to us in the West) reflections we are likely to hear - and ironically, from someone foreign to our world. And my experience is that consumerism will always be high on the agenda...

And, Heather - your comments (as always) are so insightful. The power which schools and publishers have is immense - and so we have to keep pressing towards the margins and listen to those suffering sounds of silence (for so many). If you haven't read it already, you'd just love Jenkins book on The New Faces of Christianity - reviewed here: http://paulwindsor.blogspot.co.nz/2011/03/new-faces-of-christianity.html

And, Andy - one of the ways forward from what you articulate is the kind of thing I see you model - the gift of friendship to others unlike ourselves.

from the holy mountain

Dalrymple, google maps, and wikipedia have become such a happy triumvirate in my life. Because of it, his books take so long to read, esp... 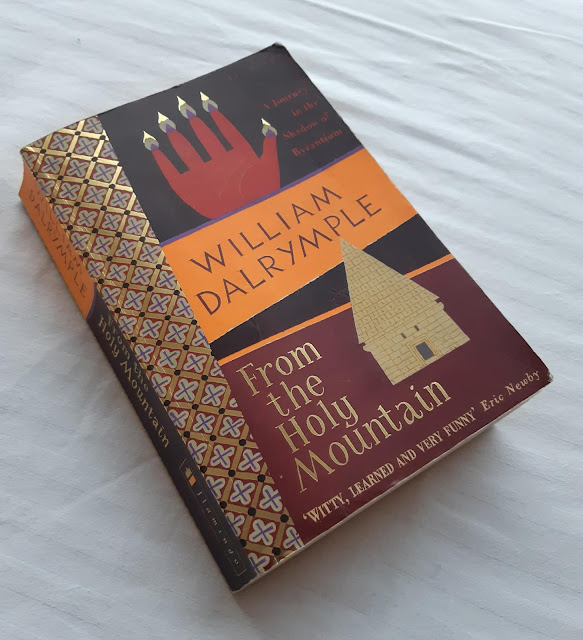