I have a soft spot for Sri Lanka. While I am unsure of the exact source of this softness, there are many tributaries which have contributed to its flow.

God's call usually works like the dawning of the day, rather than the lightning strike. It takes time. However for me, the Sri Lankan tsunami was like a lightning strike in the early dawn. It broke my heart for the peoples of the world. It was the decisive moment from when God gradually led me out of a NZ-based job into one that placed us closer to more of those peoples. Then, five years after the tsunami, I awoke one morning in Colombo to the news of the Christchurch earthquake and then spent the week listening to the pastors with whom I was working plead repeatedly, in unison and aloud, for the people of my country. I've been with many of those pastors this past week and once again I heard them pleading, in unison and aloud - this time for my son Stephen who has been so sick in Uganda with malaria.

Speaking of family, there is another tributary. Many years ago my parents adopted a Sri Lankan (Indrani) into our family ... only to discover later that I actually had a real Sri Lankan sister. In the 1950s, on the way to the UK, the boat on which my parents were travelling stopped at Colombo. My Mum was over 20 weeks pregnant and lost a little baby girl. My Dad buried Rosemary at sea in Sri Lankan waters.

Then there is Kumar Sangakkara, a favourite cricketer. Gracious, courageous, intelligent, articulate - and skilled (of all the Test cricketers with more than 10,000 runs - Sangakkara has the second highest average). Last weekend I was in Kandy and just happened to stay at a B&B owned by Kumar's auntie - with the Sangakkara family home just up the hill. Alas, no invitation was forthcoming - although I did hint at it. [NB: if there really are four Sangakkaras, as this photo suggests, maybe they could lend one to New Zealand?].

Then there is Ajith Fernando, a favourite preacher. His ability to open the Scriptures with clarity and, at the same time, open his life with transparency, without his life eclipsing the text, is second-to-none. It is just the type of preaching we need so desperately. Ajith had the publisher send me my own copy of his big new book containing expositions on Deuteronomy. I am going to read it this year...


So there are many tributaries... But one of the troubling things I see as I travel is just how often tourists gravitate towards countries run by ratbags. Sri Lanka is a shining example. It is soaring up the charts as a popular tourist destination and visitors seem oblivious to the scoundrel of a leader taking the country further and further away from democracy.

Sri Lanka has its own killing fields waiting to be dug up. On Friday I drove through the streets of Colombo with a man who wept at the wheel as he spoke of things he had seen and of the truths not yet spoken - and the nervous breakdown he narrowly avoided as a result. The president has systematically set up a government that has a form of democracy, but denies its power. As another leader said to me, 'We no longer have democracy - but empire.' So what does the church do in such a circumstance? 'Learn the art of subversion and spend lots of time in the book of Revelation.'
[NB: Vinoth Ramachandra writes helpfully on this - see here and here, for example].

But I write today because in Sri Lanka today - 3 February 2013 - one of the Anglican bishops has called for a Day of Lament. I saw his letter to his people - and some of it even made it into the local newspapers. Here are some extracts:


I write this pastoral letter to you as we approach the 65th anniversary of our national independence. It is with a heavy heart that I write it, the reason being that in the past few days we have seen the complete collapse of the rule of law in our nation. We no longer have a constitutional democracy. [NB: he is referring to the incident in Ramachandra's first post above - the illegal sacking of the Chief Justice].

The rule of law means that we as a nation are governed by a system of laws to which the lawmakers themselves are subject. This is a way of ensuring that power is not concentrated in the hands of one person (or group of persons) and exercised arbitrarily...

The numerous warnings that the Church, other religious organisations and civil society bodies repeatedly issued have been ignored. There is currently a climate of fear and helplessness, where people remain silent rather than speak out against rampant injustice, intimidation, violence and falsehoods.

We as a Christian Church cannot remain silent in this situation. Such silence will be dishonouring to our Lord and a betrayal of our identity as His people. I wish to remind you that right from the Day of Pentecost, the Church had learnt to say that 'Jesus is Lord and not Caesar'. Often this led to suffering and persecution. The Church must always be prepared for this eventuality.

There are many examples in the Bible and Christian history of persons who have refused to follow orders when they have contradicted God's moral law. Even in the Old Testament, kings were expected to rule under a law which they themselves did not make and to which they were accountable (Deuteronomy 18; Psalm 72 etc). Where rulers violated the law, God challenged them through prophetic men and women chosen and sent by him. The Church is called to be such a prophetic presence and voice in our local communities, our places of work, our schools and in the wider society.

This is a time for us as a Church to take an honest look at ourselves, where we have shamelessly compromised our loyalty to God. We need to repent of ways in which we, as individuals, as well as collectively, have:

- been silent when we should have spoken;
- allowed ourselves (thoughtlessly, or out of fear) to be used by those in authority to speak lies or commit wrong and unjust acts;
- consciously received benefits for ourselves trough acts of injustice committed against others.

I as your Bishop, call the Church to a period of lament together for the terrible state of our nation today, and repentance for our failing as a Church to 'love mercy, to seek justice and to walk humbly with the Lord" (Micah 6.8)... 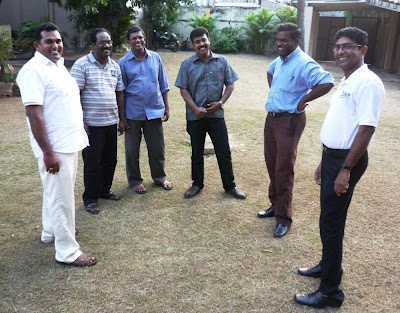 It is a stirring letter. Even as I write I am praying that Sri Lankan Christians will heed the call today.

I am also praying that the preachers being trained through Langham will develop a prophetic edge that will speak up and speak out on matters of injustice.

"Don't worry - nobody preaches a bad sermon when I am translating" — a confident, and funny, translator in the Langham Preaching work.

Over the years I have enjoyed taking two pilgrimages... One is to Rangihoua Bay, about 200km north of Auckland — and Marsden Cross, the site...