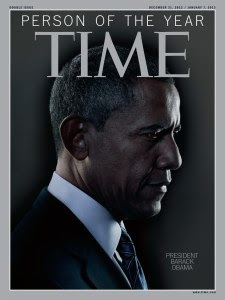 It is no great surprise that TIME magazine's Person of the Year is Barack Obama. The cynic in me recognises that about once every four years the President of the USA is predestined to win the award.

I don't read TIME anymore, but picked up a copy on the plane and found the article by Michael Scherer to be absorbing. And yes, as I read, it did occur to me that maybe TIME is in Obama's pocket, almost as much as Fox News isn't.

Nevertheless, Obama's win was more convincing than is readily acknowledged. Only five other Presidents have gained a majority of the popular vote twice. I do not agree with his every policy, but nor do I consider it wise to assess a leader on the basis of just one or two policies. As I read - with Inauguration Day tomorrow - I was reminded of a few things about leadership...

The effort expended on listening
The demographic is changing so quickly. Follow the Hispanic vote over the years, just for starters. Obama's team listened long and hard and systematically - and listening builds trust. 'The President feels a responsibility to advance the values he sees reflected in the changing electorate.' In following the election, I couldn't help sense that the Republicans were trying to hang-on to something that was passing away. Like grabbing the balloon that has already been untied. It reminded me a lot of the Barna Group research project (UnChristian) which sent shock-waves through right-wing Christianity. Something seismic has been happening. Regardless of whether we like it or not, at the very least we do need to wake up and listen.

Trust-building listening exercises have been an interest area for me over the years. As a principal I tried three different models - one with staff; one with students; one with churches. One year permission was even granted to structure the entire Baptist Assembly - 400-500 delegates - around one of those listening exercises. I had assumed that the outcomes would set the agenda (as was our custom at the college) for the Assembly Council over the coming year. I was wrong. And so the listening was good, but the opportunity to build trust was missed.

The confidence placed in younger people 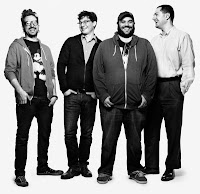 Not sure about other readers, but I found the photos in the articles fascinating. I didn't realise that Obama had surrounded himself with so many youthful advisors. The photos reveal teams 'looking' happy and relaxed - a little overkill perhaps.

It brought to mind some wisdom a student once passed on to me - 'give people responsibility, not just tasks'. And when you do this with younger people, in particular, it inspires volunteers and it instills a loyalty too. It is as if they appreciate the fact that you've taken a risk with them. From afar, the Republicans look like they are a generation behind on this one and playing catch-up.

The importance of administrative skill
The article conveyed just how well organised Obama's campaign was. It really was a machine. Every stone covered; every corner visited. And the 'geek squad' was to the fore with facebook and youtube and mobile phones all utilised to the full.

So many leaders offer themselves today as poor administrators - by being control-freakish, or by being too laissez-faire, or by saying something silly like 'it's not my gift'. It is not acceptable. It is a bit of a plague in the church. My response has always been the same - but just a bit stronger, as I get older. "For God's sake, get good at administration". And I do mean 'for God's sake'. It is not a rhetorical flourish, nibbling at sacrilege. There are basic skills that can be learned and must be learned if our service for God is to reach its potential.

The value of writing
In his second term, Obama hopes to renew his efforts at writing a diary which got lost in the busyness of the first term. 'Writing is an important exercise to clarify what I believe'. How true that is! I still urge preachers to write out their sermons fully, word-for-word, for about a decade - but to feel no compulsion to take that version of their notes into the 'pulpit' with them (and please don't read it - once again, for God's sake!). I find this is true of blogging. When all is said and done, I blog to clarify my own thinking and to store that thinking - but then also I am happy to open my thoughts up to others who may stumble across them.

While on the subject of election campaigns - be it in the USA, or anywhere else. Please ditch the ads. Everybody sees them for what they are - pathetic, costly, distracting, emotive, gutter-level exercises in spin. I'd ban them. Yeah, yeah, I know. Then we'd have a furore about free speech that makes the current one about the 'right to bear arms' look like a pea-shooter in the park (by the way maybe the Founders meant 'the right to bare arms', giving people the license to wear short-sleeved shirts and blouses in a post-puritan age?). But if they keep spending that kind of money on advertising and campaigns in the US, then does the day approach when the one with the most money wins? We won't go there...for another four years anyway.

'And Mr Obama, please do something about that polarisation in your country so that your once great country can be great again - for the sake of a world that still needs a better America offering its best leadership.'

Maybe it is time to close - but not before a Martin Luther King quote in the article - an old abolitionists' cry, to be exact - 'the arc of the moral universe is long, but it bends towards justice'.

not a wild hera said…
Thanks, Paul.