a ray of amish, a pinch of mennonite

Regular readers of this blog will know that salt and light is of great interest to me - and you could throw in grace and truth as well. These form the start of the periodic table of missional elements. They are the carbon, hydrogen, nitrogen, and oxygen of mission. The vast majority of the missional world is some combination of these four elements.

Also of interest to me is that over the past generation or so (for the church in New Zealand), my sense is that the pendulum has swung towards salt (a greater emphasis on incarnation and involvement) and away from light (a diminished emphasis on separation and distinction). When I was a kid, with my upbringing, the pendulum was clearly swinging out towards light.

So imagination my intrigue when I stepped into this museum (in Indiana), explaining the Amish and the Mennonites, and discovered this image to the right. In the salt:light tension between getting involved (salt) and staying separate (light), the Amish have leaned towards being light and the Mennonites have added a little salt.

The 13min audiovisual, which I found to be so powerful, was titled like this... 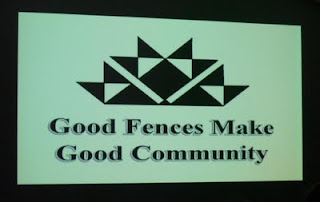 [Really?!]
... and in the museum I found this statement (just click on it to make it larger): 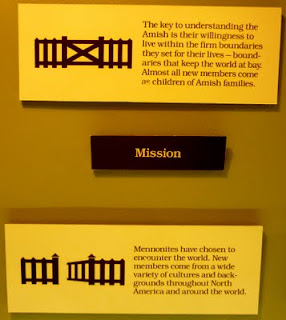 This idea of fences has been anathema in our churches. An image that gained traction a decade ago is that we need to build wells, rather than fences. 'Build the place of nurture and nourishment and people will be drawn to it in a way that makes the fence obselete'. I understand - but have never been completely convinced. It is hard to imagine Paul writing to Timothy in that vein, advising him that fences are no longer necessary. The thrust of the Amish seems to be to focus on being a 'contrast community', living distinctive with such distinction that this community within the fenceline becomes a solid foundation for mission and service.

While the sentiment is sound I am not sure that there are many observers who find this Amish strategy convincing. But while it is too much light - and not enough salt - it is a ray of light we need to see and reflect upon.

Maybe the Mennonites are onto something? Did you see the fence with the open gate in the image above? Maybe they are making a better fist of keeping alive the tension between salt and light? It is no tablespoon of salt - but maybe it is just the pinch that we require?

Coloradonegrito said…
Hi Paul,
I hear what you are saying, but I have seen the fence mentality used to exclude people who don't express their faith in the "right" words or who are working through serious questions and haven't yet come up with an answer, let alone the "right" one. I think the well idea is a good one. Here was my reflection when this happened to a friend:

Ben Carswell said…
Fascinating Paul - having lived in Lancaster County, PA (aka Amish Country), your thoughts intrigue me. Would love to chat more about the fences/walls ideas, as well as the bigger picture of Amish/Mennonites in the US & beyond. I have in my office a history of the Amish which I've not read yet. Not decided to become Amish yet.
11:01 PM, July 01, 2011

art of unpacking said…
Thanks Nige and Ben

Yes, I have no plans to turn Amish myself :) - but I was fascinated to get under their skin and sense something of their rationale for the approach they take.

I'd love to be enthusiastic only about wells - it is much easier and more popular and fits the age in which we live so much better ... but there is a time and place for the fence still.

Goodness - just thinking about raising kids. My sense is that security and identity and freedom is assisted (not eroded) by knowing where the fencelines are and living within them. I see no reason why this cannot be extrapolated - to some degree - into the family of God.