Yes, it IS as good as they say it is.

I liked Andre Agassi's Open: an autobiography (Harper Collins, 2009)for all sorts of reasons.

1. The story moves from his hatred for his father to his love for Steffi in a journey of self-discovery. It is the old cliche about "you don't know who you are until you know whose you are" and with his early family life being such a disaster, Andrei gradually 'finds himself' within the tight community which is his team, or "the entourage" which travels with him. He spends copious words on how it came together and how it stayed together (which is possibly the greatest tribute to Agassi in the book). This was his family. He was lost until he was found, one-by-one, by them with Seffi Graf being the final and fullest find-er.

On the reality of not knowing much detail about his parents' lives? "... permanently missing pieces in the jigsaw puzzle which is me" (47).
On becoming an icon in popular culture? "I can't imagine all these people trying to be like Andre Agassi, since I don't want to be Andre Agassi" (115).
On going bald? "Every morning I find a little more of my identity on my pillow, in my sink, in my drain" (117).
I loved the story because it gave me insight on the discovery of community in a life plagued by dysfunctionality. 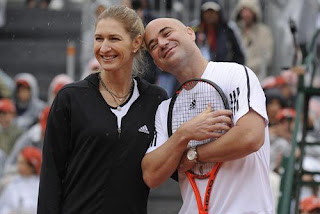 2. It is beautifully written. I loved the lack of inverted commas. They can be so intrusive. I loved the way he relates a little incident highlighted by a memorable phrase and then a little later the phrase reappears and the story is being sown together and given some horizontal gravity. For example, when he damages his wrist digging his Hummer out of the Nevada desert, he writes of the "tiny rips in the wrist that refuse to heal" (170) and then the phrase reappears a few times to describe his broken-heartedness.

But most of all I love the metaphors that adorn almost every page:
On being sent to the punishing Bollettieri Tennis Academy at a tender age? "...Lord of the Flies with forehands" (74).
On his anger associated with the Image is Everything marketing debacle? "It feels like a spoonful of acid in the pit of my stomach" (144).
On taking crystal meth? "I ease back on the couch and consider the Rubicon I've just crossed. There is a moment of regret, followed by vast sadness" (243).
On seeing a lion asleep on the road on safari in Africa? "His head is enormous. His eyes are the colour of lemon-lime Gatorade. The smell of him is a musk so primal that it makes us lightheaded. He has hair like I used to have" (263).
On a ball from James Blake in the midst of an epic match? "It hangs just where I thought it would hang, like a soap bubble" (367).
I love it. I love it. I love it. Don't ever give me this nonsense about the era of crafting-words being over. This book is selling so well because it uses words so well. But there is another reason...

3. Like it's title, the book is so "open". Agassi comes across as so human and so honest. He longs to live a life of integrity. Near the end he wrestles with the way "the lie threatens to become my legacy" (360). He writes the book largely because he wants to turn that legacy more towards the truth. Then he is so well-connected with his emotions. There is a generosity and a compassion lurking around in there as well. His mother thought he'd be a preacher (33). I can see plenty of evidence for that reasoning.
And yet I am not getting carried away! Like so many today, Agassi has a deeply narcissistic core to his being. Not only is this seen in his obsession about going bald, it also emerges in his critique of those not within his inner circle (a common narcissistic trait). He is far too hard on Brooke Shields and lingers far too long on the unraveling of that relationship. He is blistering in his views of Connors and Becker and Courier (early on). While it is a line-call(!), I reckon his descriptions of Pete Sampras are 'just out'.
But then he is committed to being "open" and that is what makes the book so compelling. 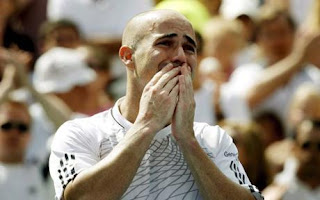 4. Not only does Agassi use words well - he has some great insight into being human:
After winning the US Open? "You know everything you need to know about people when you see their faces at the moments of your greatest triumph" (196).
On battling depression? "I feel listless, hopeless, trapped in a life I didn't choose, hounded by people I can't see" (231).
On relating to those who suffer? "I love and revere those who suffer, who have suffered. I am now more nearly a grown member of the human race. God wants us to grow up" (266).
On integrity? "I've been cheered by thousands, booed by thousands, but nothing feels as bad as the booing inside your own head during those ten minutes before you fall asleep" (272).
On his mother dying after an unhappy life with his dad? "... she's untroubled, absorbed in her books and jigsaw puzzles, putting the rest of us to shame with her unshakable calm. I see that I've underestimated her through the years. I've mistaken her silence for weakness, acquiescence. I see that she is what my father made her, as we all are, and yet, beneath the surface, she's so much more" (330).
On his supposed transformation? ""Transformation is change from one thing to another, but I started as nothing. I didn't transform, I formed. When I broke into tennis, I was like most kids: I didn't know who I was and I rebelled at being told by older people. I think older people make this mistake all the time with younger people, treating them as finished products when in fact they're in process. It's like judging a match before it's over, and I've come from behind too often, and had too many opponents come roaring back against me, to think that's a good idea" (372).

5. God tends to pop up in two ways in the story. Firstly, in Agassi's great love for the movie Shadowlands and the CS Lewis life story. Secondy, in Agassi's great disdain for the very public Christian testimony of Michael Chang. That's about it. The story of Agassi is like Ecclesiastes without the chapter 12. The pursuits, the contradictions, the emptiness, the generosity ... it is ALL there! Except chapter 12. He hasn't remembered his Creator before his body began to seize up and he hasn't yet discovered the secret of life to be found in fearing and obeying God. And so despite all the things I loved about it, the story leaves me with an unavoidable sadness.

Ben Carswell said…
Thanks for posting this Paul - you've persuaded me to get it & read it. Andrew Becroft was saying it was one of the best sports autobiographies he'd read. I love sports autobiogs, but so many are ghost-written & therefore poor in their insights into the person.
I remember early in his career, people were saying he was a Christian, so interesting to read your comments in light of this.
His description you've classed under integrity is brilliant...and his comments on depression remind me of Marcus Trescothick's very open autobiog where he deals with his battles very honestly.
11:53 AM, February 18, 2010

art of unpacking said…
One of the riveting sections in the book his Agassi's match with James Blake at the US Open in 2006. He states how "this match stands apart from others" (367) and how the last three sets are "the best tennis I've ever played" (368)

... and I found the fifth set tie-breaker on youtube, with pp365-368 providing a nice little commentary:

Reetz said…
You should be a book reviewer, this book will go up in sales for anyone who reads this post Paul. :)
I'm going to buy it too. I wanted to hug him for a long long time after reading the 'cheered by thousands, booed by thousands but nothing is worse than the booing inside your head in the ten minutes before you go to sleep'.
11:49 PM, February 21, 2010

Blair D said…
Paul, I was so impressed with your review I interrupted my wife and what she was doing to read some of it to her. In regards to your comments about his narcissism and the sadness you felt at the end of the book and on his not knowing his creator: perhaps his own comments about being a young tennis player are applicable, "I think older people make this mistake all the time with younger people, treating them as finished products when in fact they're in process." I hope, with regards to his journey to knowing his creator, that he is indeed still in process - the process of moving closer to Him.
9:39 PM, February 22, 2010

art of unpacking said…
Yes, Reetz and Blair - you actually pick on the two quotations that keep going around in my mind...

With the one you highlight, Blair:
I think Andre touches on one of the great failings of teachers of the young... There is a danger of teaching them from out of our own exciting growing edge, rather than remembering what we needed when we were their age and giving them the same space and time to grow that we enjoyed. Building fifth floors without first building foundations ain't too smart.
And you are right, the process isn't over for Andre - nor is it over for those nearer and dearer to us for whom we are burdened.
12:06 PM, February 23, 2010

Augustine Soren said…
On his mother dying after an unhappy life with his dad? "

This line is touching. Thank you, Uncle, for the explanation. Many times we compare silence with weakness but its wrong to judge in this way.