This book by David Kinnaman gathers the outcomes of a three year study by The Barna Group into the way 16-29yr olds 'outside' the church perceive Christianity. 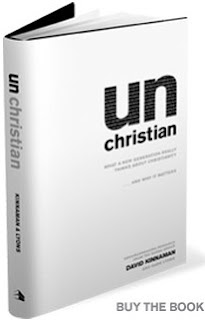 The book uncovers a hostility and skepticism towards the church unheard of in any previous generation. This serious image problem for the church centers around it being:
(a) too hypocritical ('saying one thing and doing another');
(b) too focused on getting converts (outsiders 'feel like targets rather than people' p29);
(c) too antihomosexual (for a staggering 91% of respondents - as 'hostility towards gays has become virtually synonymous with Christian faith' p92);
(d) too sheltered ('Christians seem aloof and insulated', p124);
(e) too political ('a movement that was bursting with energy to spread good news to people 20 years ago - has been exchanged for an aggressive political strategy that demonises segments of society', p153);
(f) too judgmental ( a staggering 87% of respondents - making a habit out of pointing out 'something that is wrong in someone else's life, making the person feel put down, excluded, or marginalised', p182).

[Check-out this link on YouTube for further discussion on the book.]

There is so much to like about this book. I like the humble open tone. I like the way it avoids the easy alternative of promoting a less offensive faith. NO! "We live it ... we embrace and describe all the potency, depth, complexity, and realism of following Christ." (p209) I like the way they try to be constructive. Each chapter concludes with respected leaders contributing short pieces on what can be done to change these perceptions (written in a different font to reinforce the point!). I like the eye on key biblical themes like truth:grace and salt:light (practice "proximity and purity", p133). I like the plethora of rhetorical questions which draws me into the book. I like the way we are called back to Jesus: "Christ followers must learn to respond to people in the way Jesus did." (p206)

Instinctively I like their conclusion: "I believe the negative perceptions that now exist are partly a symptom of a church that has lost its heart for outsiders ... I hope we put aside casual forms of Christianity, piercing the antagonism of our peers with service and sacrifice." (p213, 217)

Seven stats that stick with me...
1. "Among young outsiders, 84% say they personally know at least one committed Christian. Yet just 15% thought the lifestyles of those Christ-followers were significantly different from the norm." (p48)

2. "Only one third of young outsiders believe that Christians genuinely care about them." (p68)

3. "Radio, television and tracts accounted for a combined total of less than one-half of one per cent of the Busters (ie those in their twenties) who are born-again ... we found that these (mass-media) measures create three to ten times as much negative response as positive ... the collateral damage is significantly greater than the positive impact." (p70-71)

4. "For every 100 people who are not born again by the time they reach 18, only 6 of those individuals will commit their lives to Christ as an adult." (p72)

6. Just one-third of 18-41yr olds consider that the content of movies and TV is "a major problem facing America ... (our research) suggest a mix of two reasons: they don't care (they are not threatened by relativistic values), and they don't notice (they are not as likely to reject values that conflict with their own)." (p126)

Kiwi Connections?
Christianity leaves nowhere near the 'footprint' in public life in NZ that it does in the US. I suspect this is significant. While we will find a similar hostility and skepticism I wonder if, with a smaller footprint, our challenge is the sheer irrelevance of Christianity and the way people ignore the church. The authors state that their purpose is to "recapture Christianity's reputation in our culture." (p221)I am not convinced that 'recapture' is the correct verb for us in NZ ... was it ever 'captured' in the first place? Does that make it easier for us?

The statistics relating to biblical worldview are just appalling (#5 above). Probably the most depressing part of the book for me. 3%? 9%? No wonder the church is so ineffective! Part of what is needed is a fresh commitment to the best in both systematic biblical preaching and serious theological training...

We need to let the grace at work in our lives channel out to what and where the New Testament says it should channel: to the life of good works both among the insider and the outsider.

If I was a pastor, I'd take a few initiatives in 2009. (i) I'd buy a copy of this book for all the church leadership team and at each of the first six meetings of the year we'd discuss one of these themes, reflecting on it's presence within our context; (ii) I'd plan a topical Sunday sermon series for Oct-Nov during which we would discuss each one of these perceptions; (iii) I'd activate an artistic bunch in the church to fill the billboard space outside the church with self-deprecating, subversive imagery that constitutes a public confessional for our 'unChristian' behaviour and creates discussion in church and community; and (iv) I'd hold an open forum at the conclusion of the series to find ways to move forward.

Tash McGill said…
I'm fascinated to read this book because I think the findings are so contradictory to the wider body of research around how Generation Y operates and responds to so much else in life.

What and how have we (the Church) become so off base with a group like this - who are more morally, ethically driven than the previous generations..
9:15 AM, December 31, 2008

art of unpacking said…
Actually I think you'll find that the book does not contradict what you are saying, Tash. It is focusing almost solely on the perceptions which 'Mosaics and Busters' outside of the church have of the church and those inside it. I don't think it is trying to categorise this generation as such...
Happy New Year!
7:40 AM, January 01, 2009